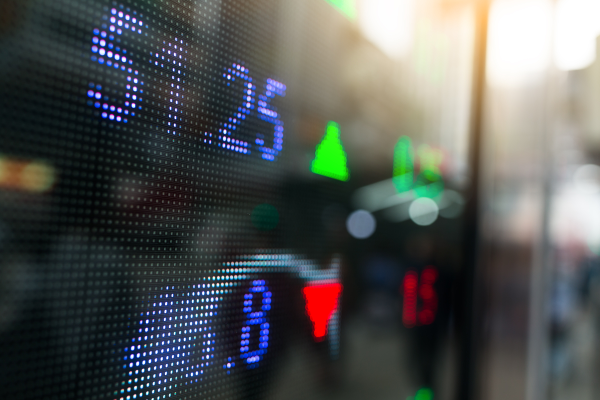 A review of the headlines from the past year could easily lead one to conclude that the markets were likely to have struggled.  Beginning with a Presidential transition that was anything but conventional, a summertime surge in Covid driven by the Delta variant and a late-year surge driven by the Omicron variant, strained relations with Russia and China, the withdrawal from Afghanistan, supply chain disruptions, inflation at multi-decade highs, more drama in Washington, D.C., and the Federal Reserve on the cusp of raising interest rates.  Despite all this the American economy is about to embark on its third year of expansion and the S&P 500 closed out 2021 near all-time highs.

Anyone who may have been presented with this set of facts and made the decision to play it safe and remain in cash or higher levels of fixed income would have missed out on strong returns as nearly everything outside of hedge funds, emerging markets, bonds and gold was up by double digits in 2021. 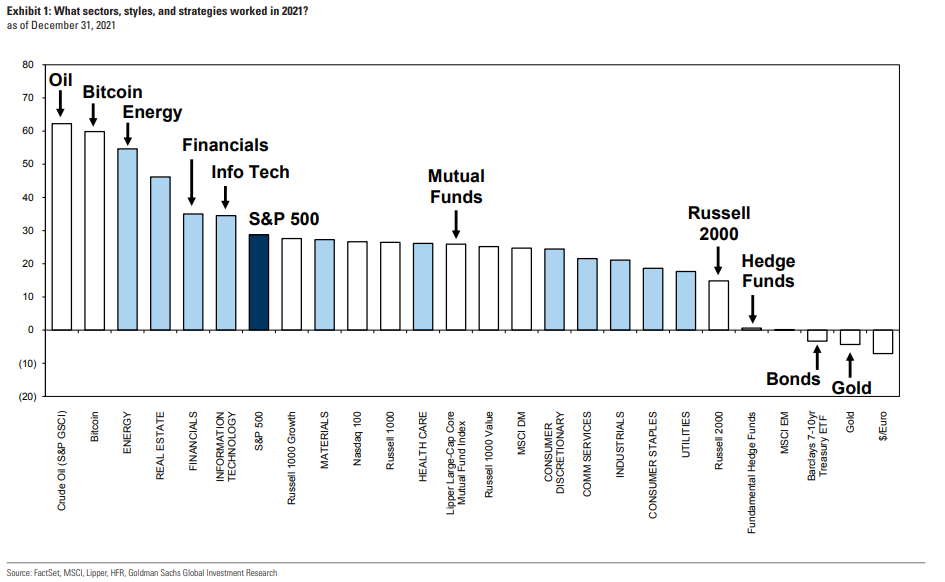 Volatility increased during the final month of the year with 10 of the 22 trading days posting at least a 1% change compared to only 3 days in November and 4 days in October.  Both the Grinch and Santa Claus appeared to be in control at different points.  The S&P 500 began the month with a one-day sell-off of over 1% but managed to stage a rally that put the market up over 3% by mid-month.  The S&P 500 once again traded down between the 15th and the 20th but turned around in the final two weeks to finish the month with a return of 4.47%.  It was the best December since 2010 when the market was up over 6%. 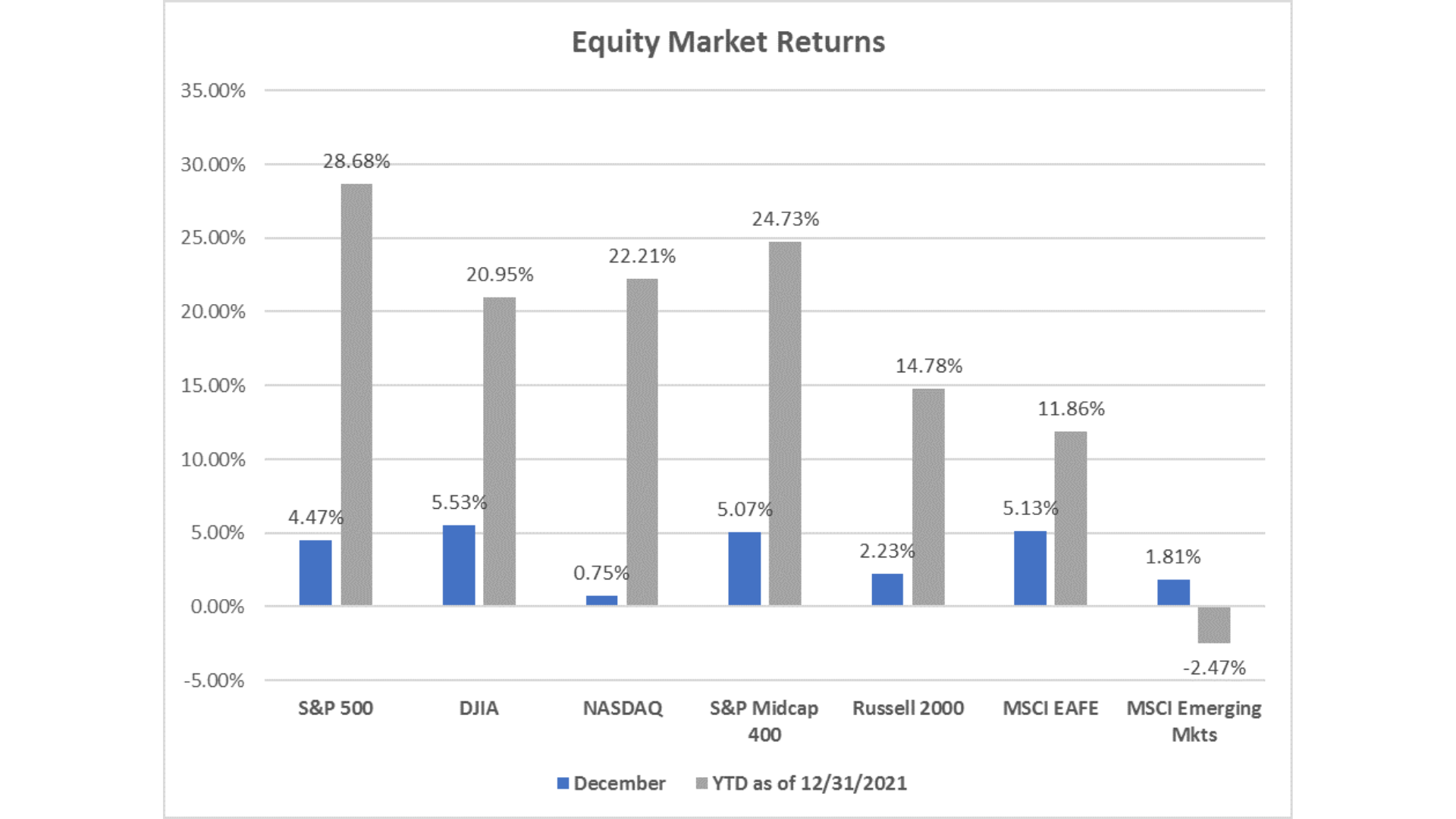 The market’s strong performance has been well supported by earnings. For the entire calendar year, the companies that make up the S&P 500 are expected to post year-over-year earnings growth of 45.1% according to FactSet. This will mark the highest annual earnings growth rate since FactSet began tracking this metric.

Among the other market benchmarks, the Dow and the S&P Midcap both did better than the S&P during the month, as did the MSCI EAFE benchmark of foreign developed stocks.  The tech-heavy NASDAQ index was the laggard for the month with a return of 0.75%.

For the entire calendar year, the S&P 500 was the best performing benchmark, up 28.68%, followed by the S&P Midcap and the NASDAQ.  Emerging markets were the only benchmark with a decline during the year. 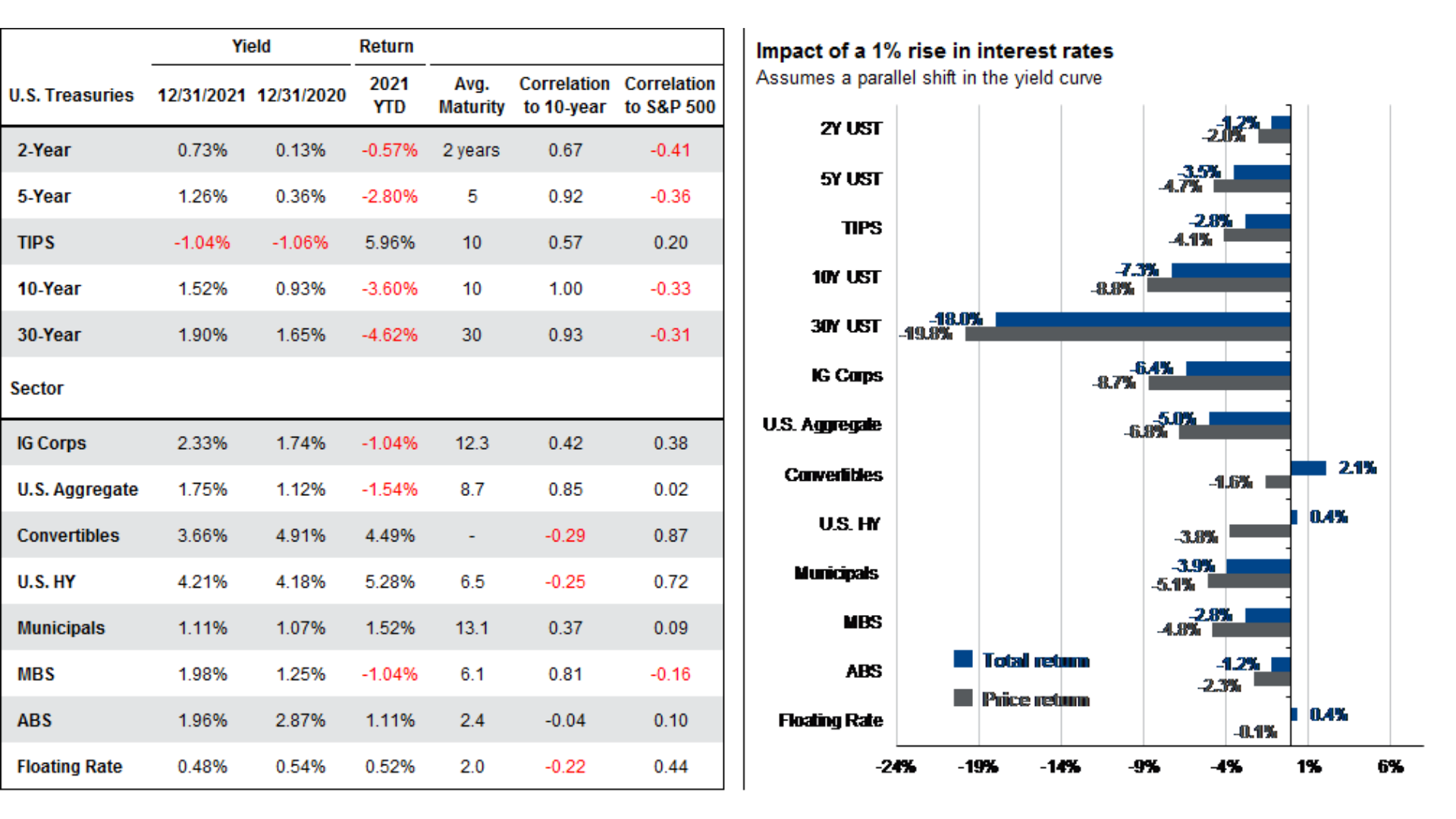 Bond returns were mostly negative during the year as inflation rose to multi-decade highs and the Federal Reserve announced they expect to begin hiking rates in 2022.  Both the 2-year and the 10-year Treasuries saw their yields rise by about 0.60% during the year, while the yield on the 5-year note rose by 0.90%.  The yield on the 30-year bond was up 0.25%.  Rising rates cause the prices of bonds to fall, which led to negative returns across the board for Treasury securities. The only exception was Treasury Inflation Protected Securities, or TIPS, which are priced according to the rate of inflation.  As the inflation index increased throughout the year the prices of TIPS actually benefitted from a positive adjustment to their par value.

After a long period of generally falling interest rates, the past year is a good reminder that bond returns can have stretches of negative performance.  The chart on the right shows the hypothetical impact of a 1% rise in interest rates for various sectors of the bond market.

The experience of the past two years underscores the fact that the path of the markets and the economy are difficult, if not impossible, to predict.  In fact, if one had been given the headlines for 2020 and 2021 in late-2019 it is very unlikely they would have predicted that the market would have finished with back-to-back years of double-digit gains and sitting near all-time highs.

Looking ahead it helps to focus on the big picture.  The current economic expansion is very young by historic standards, earnings growth has been robust and is expected to continue, there are more job openings than there are workers to fill them so employees should have no problem finding good paying jobs.  Inflation could persist and continue to rise.  However, it is also possible that it will subside as supply chain issues get worked out in the coming months.  True, Covid is currently raging at a level that surpasses anything we’ve witnessed so far.  However, the Omicron variant while highly transmissible, does appear to be causing less severe infections.  Perhaps this will prove to be the final surge which will eventually allow us to move beyond the experience of the past 22+ months.

Instead of taking a top-down approach and trying to accurately predict how macro events might impact the markets in the short run, we believe that the better approach for our clients is the same one that has worked for decades: Own a properly diversified portfolio that is aligned with your individual goals and benefit from the long-term growth of the markets and the economy.

Welcome Soren to the P&A Team 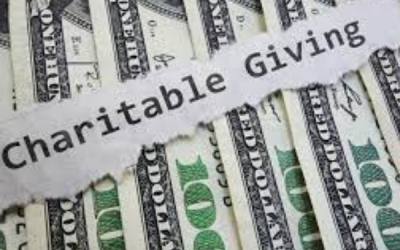 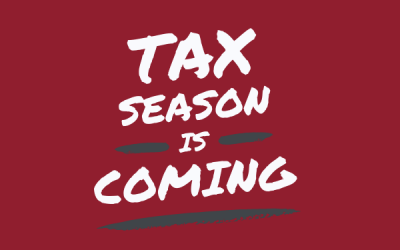 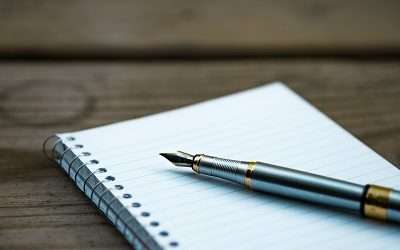